BERLIN — European governments moved this weekend to soften the blow of soaring costs and a deepening energy crisis triggered by the war in Ukraine, and scrambled to prepare for the possibility of social unrest as the days grow colder.

With Europe trying to wean itself off Russian fossil fuels, and the first mass protests over energy costs appearing on the continent, governments are racing to adopt stopgap measures ahead of the fall and winter. Energy ministers of the European Union have planned an emergency meeting this week, and three different countries announced relief measures on Sunday.

The biggest package came from Germany, where Chancellor Olaf Scholz’s government pledged $65 billion in relief measures to cushion the blow of inflation and the energy crisis, which worsened after Russia’s invasion of Ukraine and Western governments’ imposition of harsh sanctions on Moscow in response. Europe is now working to drastically reduce its purchases of Russian oil and gas.

Berlin announced its package two days after Gazprom, the Kremlin-controlled Russian energy giant, announced an indefinite halt to the flow of gas through the Nord Stream 1 pipeline that terminates in Germany and provides gas to much of Europe. Gazprom said the pipeline would remain closed until problems found during inspections were resolved, but offered no timeline.

European officials say the move is politically motivated. It came on Friday, the same day that finance ministers for the Group of 7 countries agreed to impose a price cap on Russian oil in an effort to cut off some of the energy revenue Moscow continues to earn from Europe.

A protest in Prague on Saturday against the Czech government and its response to the energy crisis.Credit…Martin Divisek/EPA, via Shutterstock

“Russia is no longer a reliable energy supplier — that is part of the new reality,” Mr. Scholz said in his speech announcing the package on Sunday. “We are all feeling the consequences of the Russian war.”

Economic anxiety is palpable across Europe.

In Prague, a day after the government survived a no-confidence vote over accusations that it had failed to act on soaring prices, tens of thousands of protesters took to the streets on Saturday to voice outrage over energy costs. Led by far-right and fringe political groups, many demonstrators also criticized the Czech Republic’s membership in NATO and the European Union.

The protests underline growing concerns among European leaders that the energy crisis and soaring inflation could trigger political instability. Many citizens said they feared for their savings, and worried they might be unable to pay their bills come winter.

In the east of England, James Allcock said he had put his life savings into his bistro in Beverley. Now, the 36-year-old fears he might lose everything. “If there is no government help in the next two to three weeks,” said, “we won’t have a business this time next year.”

The economic ripples from the war have given pause to some Europeans who back Kyiv.

“Ultimately, you always want to do the right thing,” Mr. Allcock said, “but I’d be lying if I said it hasn’t made me stop and think again. But it wouldn’t change my opinion. You have to support Ukraine and break from Russian energy. But you have to do that hand in glove with support at home.”

On Sunday, Liz Truss, the front-runner to become Britain’s new prime minister, said she would “act immediately” to deal with soaring energy costs if elected.

A protest in London against the British energy regulator Ofgem after it raised the cap on gas and electricity prices last month.Credit…Alastair Grant/Associated Press

In Stockholm, the Swedish government said it would offer $23 billion in liquidity to help energy companies with supply purchases until March. Without that support, Finance Minister Mikael Damberg said, some electricity providers risk going into “technical bankruptcy” by Monday.

France has begun its biggest conservation effort since the 1970s oil crisis, with President Emmanuel Macron calling for an era of energy “sobriety.” The government has spent over $26 billion to defray the cost of rising household energy bills. And it has demanded businesses appoint an “ambassador of energy sobriety” and share their plans for cutting electricity consumption with the government.

Olena Zelenska, the wife of Ukraine’s president, Volodymyr Zelensky, told the BBC in an interview this weekend that she realized much of Europe was suffering from higher energy costs, but she urged viewers to consider the price being paid in her country.

“I understand the situation is very tough,” Ms. Zelenska said. “The prices are going up in Ukraine as well. But in addition, our people get killed. So when you start counting pennies in your bank account, or in your pocket, we do the same and count our casualties.”

Despite all the concerns over the economic pain, the European Union does not appear to be backing down on plans to toughen measures on Russia.

On Sunday, Mr. Zelensky of Ukraine said he had spoken to the president of the European Commission, Ursula von Der Leyen, to coordinate ways to limit Russian profits from the sale of oil and gas.

In Ukraine, Ukrainian forces continued their push to reclaim Russian-seized territory in the south, with the pace of fighting intensifying as the fighting stretches into its seventh month.

Damage to a hotel in Mykolaiv, in southern Ukraine, on Sunday.Credit…Jim Huylebroek for The New York Times

Ukraine has been publicly signaling the offensive for weeks, and Russia has been racing to move equipment and reserves to the region to bolster its defensive positions, according to the Ukrainian military and its Western allies. Military analysts have said that between 15,000 to 25,000 Russian soldiers may now be positioned to the west of the Dnipro.

The war has pushed countries like Germany to move quickly to decrease dependency on Russian gas, which once accounted for about half its imports but has now been driven down to around 10 percent.

Nonetheless, many in Europe have begun to worry that as the economic cost of support for Ukraine grows, popular support could turn against governments that support Ukraine.

Protests are already being planned in Germany by the far right and the country’s leading left-wing party, Die Linke. Some unions have also vowed to protest, should the latest government measures not ease the problems facing lower income citizens.

“I hope that unions and other progressive players find a way to articulate their concerns in a constructive way,” said Vincent Sipeer, 21, a student in Berlin. If not, he worries, some with economic anxieties might end up aligning with groups demanding reconciliation with Russia.

Germany is relatively well prepared for the winter, having managed to fill its gas storage to over 80 percent, and a with a slew of national energy saving measures already imposed. But inflation is still hitting hard, reaching nearly 8 percent in August, its highest in four decades.

The Nordstream 1 pipeline and transfer station in Lubmin, Germany last week. Germany has managed to fill its reserves to 80 percent capacity ahead of winter.Credit…Lisi Niesner/Reuters

Last week, a national radio talk show devoted an entire episode to advice from experts on how citizens could cut costs.

Mr. Scholz said he “very aware that many citizens are worried about their future,” but vowed that “no one will be left behind.”

With prices for natural gas now 10 times higher than a year ago, the pain will be still higher for less wealthy European states.

But even Europe’s largest economy is bracing for a hard stretch.

“We are facing difficult times,” Mr. Scholz said. But, he assured Germans: “We will get through this winter.”

Reporting was contributed by Christopher F. Schuetze from Berlin, Emma Bubola from London and Liz Alderman from TKTK. 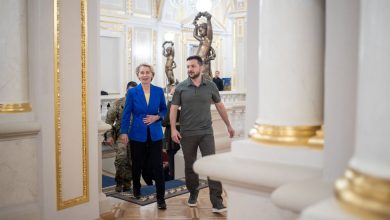 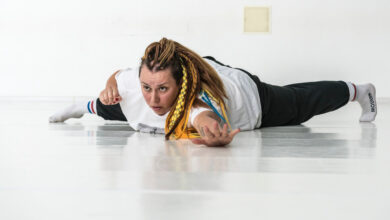 What Does a Dancing Body Feel Like in Ukraine? ‘I Am a Gun.’ 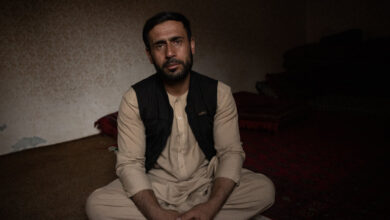