A month before George Santos was elected to Congress, one of his large donors received a call asking him to consider making another sizable contribution.

The request came from a Republican loyalist calling on behalf of RedStone Strategies, which was described in an email to the donor as an “independent expenditure” group that was supporting Mr. Santos’s bid to flip a Democratic House seat in New York. The group had already raised $800,000 and was seeking to raise another $700,000, according to the email, which was reviewed by The New York Times.

The donor came through: Days later, on Oct. 21, he sent $25,000 to a Wells Fargo Bank account belonging to RedStone Strategies.

Three months later, Mr. Santos is now in Congress, but where the donor’s money went is unclear. The Federal Election Commission said it had no evidence that RedStone Strategies was registered as a political group, and there do not appear to be any records documenting its donors, contributions or spending.

Mr. Santos and his lawyer refused to answer questions about RedStone’s fund-raising efforts and whether Mr. Santos was involved in them. But he did have ties to a Redstone Strategies LLC, registered to an address in Merritt Island, Fla., in November 2021, as Mr. Santos was preparing his second run for Congress. The firm listed the Devolder Organization, a company owned by Mr. Santos, as one of its managing officers.

A company website describes that Redstone as being run by “experters in marketing and others in politics” whose services in ad creation, communications and fund-raising have value “no matter if you are in a local race or if you are going to be the next president of the United States.”

Yet the firm’s body of work — at least for candidates and committees that are required to file campaign expense reports — appears limited. A Times search of campaign finance records uncovered payments from a failed House candidate on Long Island and two groups tied to New York legislative candidates.

It also shows a payment from a PAC called Rise NY, run by Mr. Santos’s sister, Tiffany. State records show the group sent a wire transfer for $6,000 in April 2022 to Red Stone Strategies. It listed a Wells Fargo Bank branch on Merritt Island as its address. 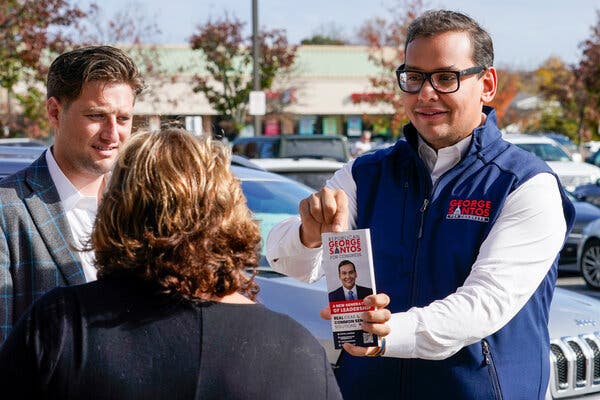 A group raising funds to aid Mr. Santos’s campaign has not registered with the Federal Election Commission.Credit…Mary Altaffer/Associated Press

The murkiness around the fund-raising operations on behalf of Mr. Santos makes it difficult to know whether any laws were broken. But a close examination of available records suggest RedStone may have skirted the law.

The email to the donor described it as an “independent expenditure committee under federal campaign finance law” with the “singular purpose” of electing Mr. Santos.

More on the George Santos Controversy

Such groups, also known as super PACs, can support candidates by raising vast sums of money far beyond strict campaign donor limits. Even so, there are rules: They must register with the Federal Election Commission and disclose their donors. And they must not coordinate directly with campaigns.

Yet the F.E.C. has no record of RedStone Strategies. The Daily Beast has reported that Redstone Strategies LLC of Florida had a connection to Mr. Santos, but the existence of a group operating under the name RedStone raising large sums of money for his election has not previously been revealed.

“I don’t see a record by a committee of that name registered with the F.E.C., and our regulations would be if a political group raises more than $1,000 for the purpose of influencing a federal election, they would be required to register with the F.E.C. within 10 days,” said Christian Hilland, an F.E.C. spokesman.

The person who solicited the donor said he was asked by Mr. Santos in the weeks leading up to the campaign to approach donors, some of whom had already given the maximum allowed to Mr. Santos’s election campaign, and to help coordinate their donations to RedStone, according to a person familiar with the arrangement who wished to remain anonymous.

A lawyer for Mr. Santos declined to respond to The Times’s questions about RedStone, saying that “it would be inappropriate to respond to anything related to this apparent investigation of my client’s campaign finances.”

Mr. Santos’s finances have come under scrutiny after The Times reported last month that his successful run for Congress in New York was built on lies, including fabrications of real estate fortune, academic distinction and a glittering career on Wall Street.

Much about his web of personal and political entities — and whether or how they are in fact interrelated — is still unknown and has attracted interest from local state and federal investigators. His sudden claim to wealth has also raised questions.

According to financial disclosures that he filed as a candidate, Mr. Santos claimed that he went from earning $55,000 to running a company worth more than a million dollars in just a few years. That ostensibly enabled him to lend his campaign more than $700,000 — slightly less than the amount that RedStone Strategies claimed to have raised.

Mr. Santos’s campaign spending has also come under question, with scores of expenses for $199.99 — exactly one cent below the threshold for requiring receipts. The suspicious spending pattern served as a partial basis of a complaint that the Campaign Legal Center filed on Monday with the Federal Election Commission, accusing Mr. Santos of not only using campaign funds for personal use and misrepresenting spending but also of scheming to obscure the true source of his campaign funding.

The person who solicited the $25,000 donation to RedStone has been active in the Queens Republican Party and described himself as Mr. Santos’s friend.

The donor, who did not wish to be identified, confirmed that he was told by the Queens Republican operative that the $25,000 that he gave to RedStone in October would be used as part of a large ad buy for Mr. Santos.

But the donor said he did not hear anything back on how the funds were spent. A review of spending by the company AdImpact does not show the group making any ad buys on Mr. Santos’s behalf, nor did it show any spending for Mr. Santos from other independent groups in the months leading up to Election Day.

If a group raised money under false political pretense, that activity could lead federal election officials to regard it as what is commonly known as a “scam PAC” — a group that raises money without spending it on the stated political purpose, a practice that is increasingly a concern of the F.E.C., Mr. Hilland said.

Redstone Strategies LLC of Florida listed one other manager in its incorporation records: Jayson Benoit, a business partner of Mr. Santos and former colleague at Harbor City Capital, which shut down after the S.E.C. filed a lawsuit accusing it of operating as a Ponzi scheme. (Neither Mr. Santos nor Mr. Benoit, who did not respond to requests for comment, were named in that suit.)

Mr. Santos was sworn in over the weekend, despite pressure from some Democrats, including Assemblyman Charles Lavine, to resign.Credit…Dave Sanders for The New York Times

Mr. Santos ultimately acknowledged having misled voters about his educational and work history, saying that his sins were embellishing his résumé and nothing more. He was sworn in last weekend, evenas colleagues in Congress have called for ethics inquiries into his behavior, and Republican leaders in New York, including four first-term congressmen, have called for his resignation. Prosecutors at the local, state and federal level have indicated they are looking at Mr. Santos.

Another potential area of concern about RedStone Strategies was the way it was described in its donor solicitation email as a 501c4 — a type of tax-exempt group organized for the promotion of social welfare. These entities pay no federal taxes and may engage in politics so long as their major purpose is not electing candidates to office.

“They can spend up to 49.9 percent of their budget on candidate election work,” explained Paul S. Ryan, an expert in federal election law, who added that political spending was allowed as long as it was not the group’s primary purpose.

But while the donor email describes the group as a 501c4, it also pledges to dedicate “all its resources” to electing Mr. Santos — language that Mr. Ryan suggested was troubling.

“You can get away with it if you are not foolish enough to put in writing that you’re all about candidate elections,” Mr. Ryan said.

RedStone Strategies was not the only group whose activity raised warning flags among campaign finance experts.

Rise NY is a state PAC created in December 2020 by Mr. Santos’s campaign treasurer, Nancy Marks, and his sister. A Twitter profile of the group describes its purpose as “new voter registration & education as well as raising election awareness & voter enthusiasm.” The PAC raised vast sums from donors who had otherwise maxed out donating to Mr. Santos’s campaign, as reported by Newsday. One donor contributed $150,000, according to New York State Board of Election records, well beyond the limits of $2,900 per election placed on federal campaign contributions for direct campaign activity.

A close examination of the group’s spending, however, reveals that many of Rise NY’s actions would be considered unusual, if not a violation. PACs like Rise NY are allowed under New York State law to give directly to candidates or authorized committees, but may not spend in other ways to help a campaign.

Yet Rise NY issued payments for wages and professional services to Santos campaign workers, including Mr. Santos’s press secretary. It also directed $10,000 in payments to a company run by Ms. Marks, the campaign treasurer. And Ms. Santos earned $20,000 for her work as the PAC’s president. She did not respond to a request for comment.

Its expenditures took place at many of the spots that Mr. Santos’s campaign filings show he liked to frequent, including Il Bacco, a restaurant in Queens where his campaign spent roughly $14,000, and an Exxon Mobil gas station that is a two-minute drive from his former apartment in Whitestone, Queens.

One donor said that he gave to the PAC after being contacted by Samuel Miele, who said in an email that he was the vice president of Rise NY. Mr. Miele was also working directly for Mr. Santos, but was later fired after he was caught impersonating a staffer for Representative Kevin McCarthy, at the time the Republican minority leader, in a fund-raising appeal, several people close to the campaign said.

Two former consultants to the Santos campaign who requested anonymity in order to speak freely about their former client said that they were concerned about the close arrangement between the campaign and Rise NY, and told Mr. Santos that he should shut it down. A third former consultant turned down what it described as a lucrative offer from Mr. Santos to fund-raise for the PAC, citing legal concerns.

Tags
From Group That Was Who 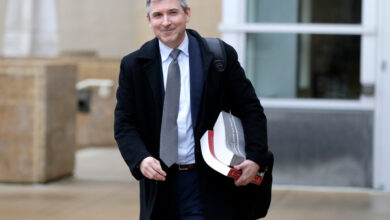 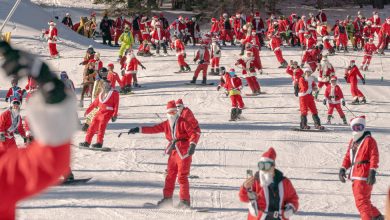 How Californians Are Celebrating the Holidays 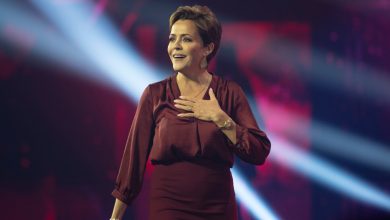 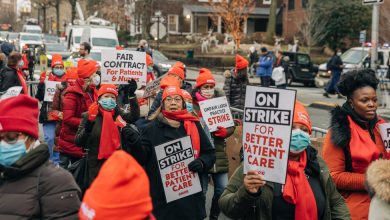