So the Golden Globes returned, two years after disappearing from our screens, first because of a pandemic-induced lockdown and then because of scandal — financial, ethical and racial. And with their disappearance went the first major red carpet of that phenomenon otherwise known as the Extended Awards Season Fashion Show.

Before the event, speculation was rife: Would stars actually show up for the tarnished Hollywood Foreign Press Association? And if they did, would they seek to play down their connection with the evening’s awards by dressing down? Would they stay away from eye-catching ensembles, in favor of the forgettably banal and the bland?

As if. Globes night turned out to be a night of statement-making, onstage and on the red carpet. Not so much of the marketing or branding kind, but rather of the personal kind. And it was the more interesting for it.

Jerrod Carmichael might have set a record for the number of looks worn by one host.Credit…Rich Polk/NBC, via Getty Images

Jerrod Carmichael, the host, set the tone with an opening monologue that addressed the Globes’ historical lack of diversity without pulling any punches and went on from there — with a matching set of six (count ’em) outfit changes that included two skinny black velvet suits (the first by Armani); a symphony of pinks; one white tuxedo with a sheer turtleneck and pearl necklace; and a Bode beaded tunic. It may be a record for number of award show looks worn by a single host. If some fashion brand doesn’t sign him up immediately, it’ll be the biggest surprise of the night. 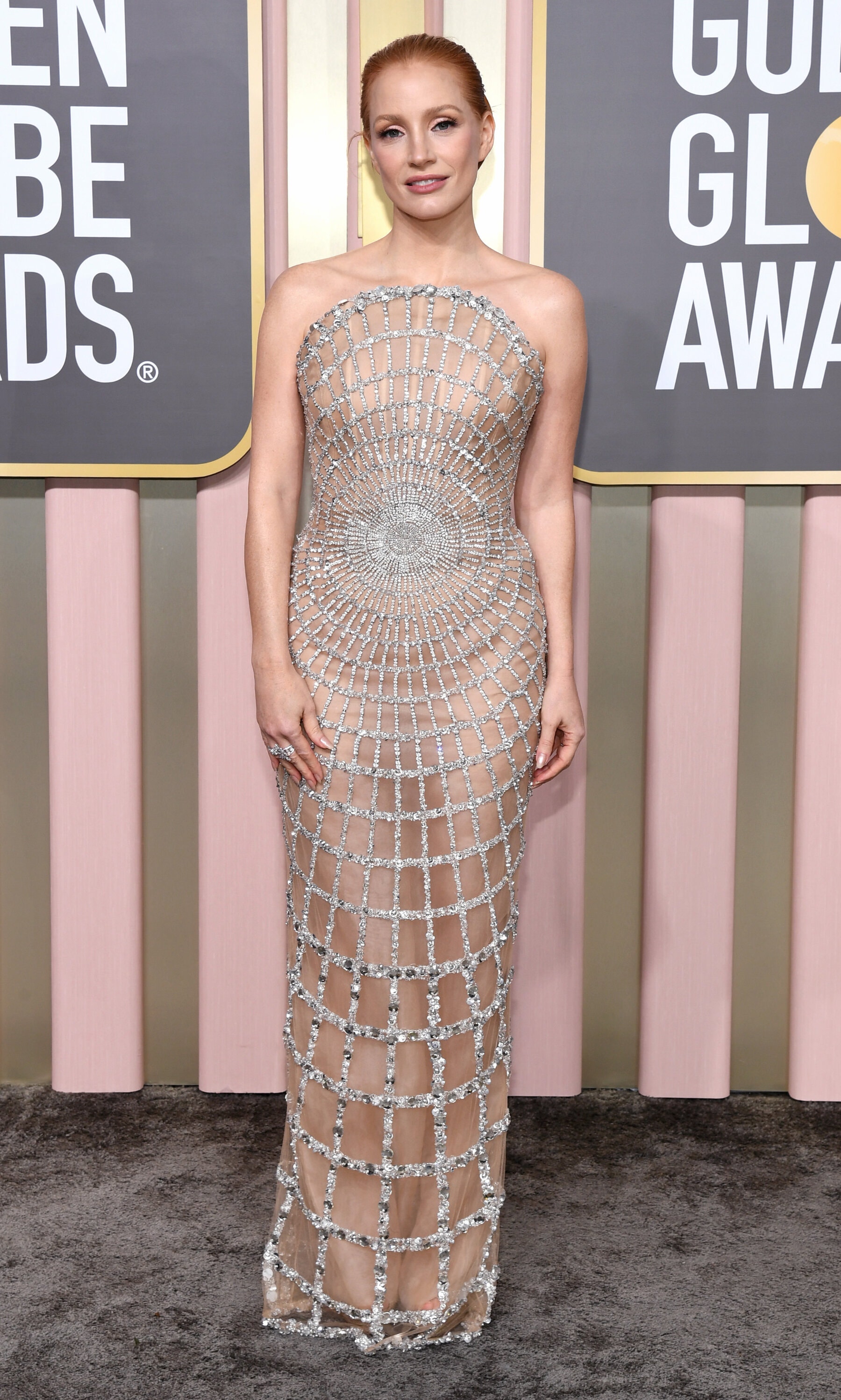 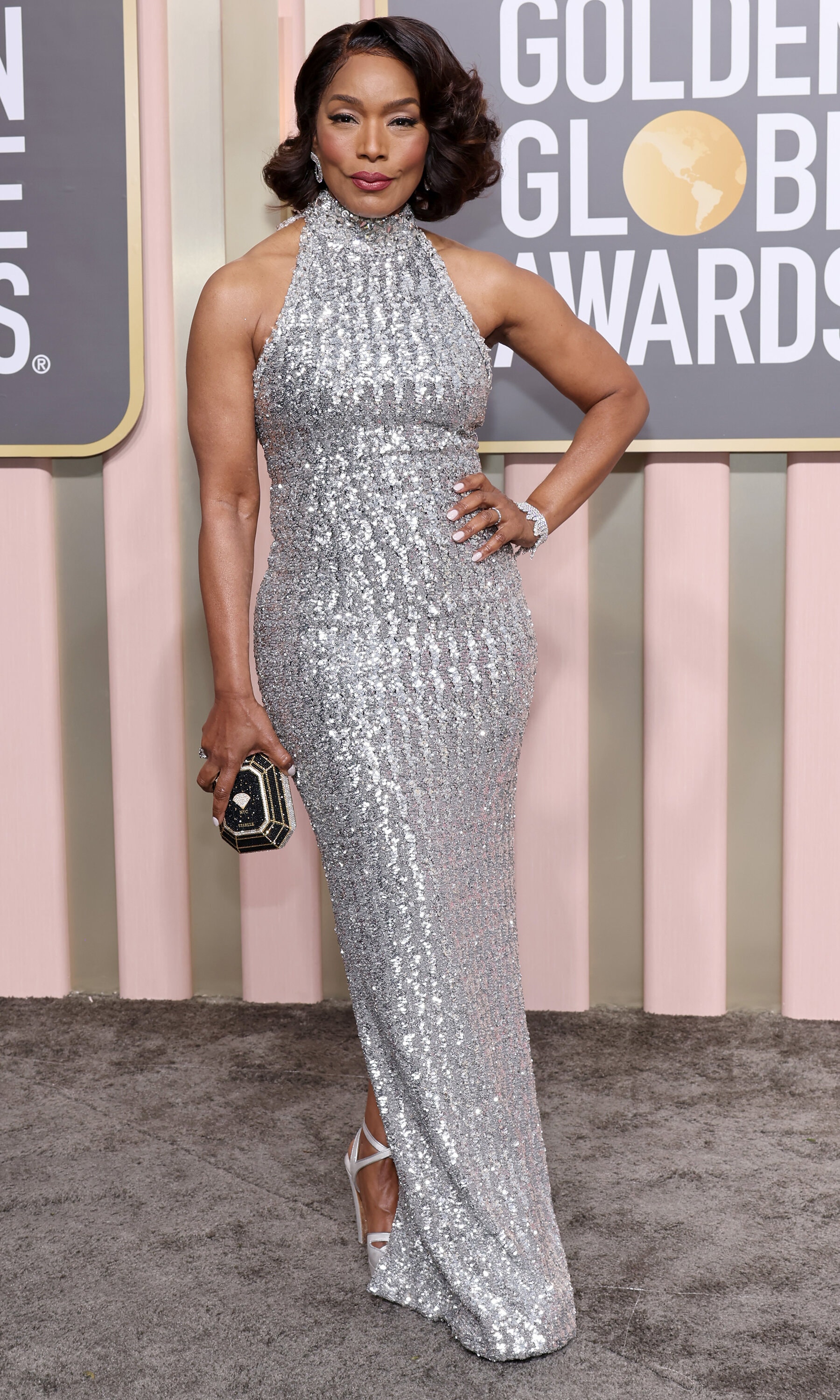 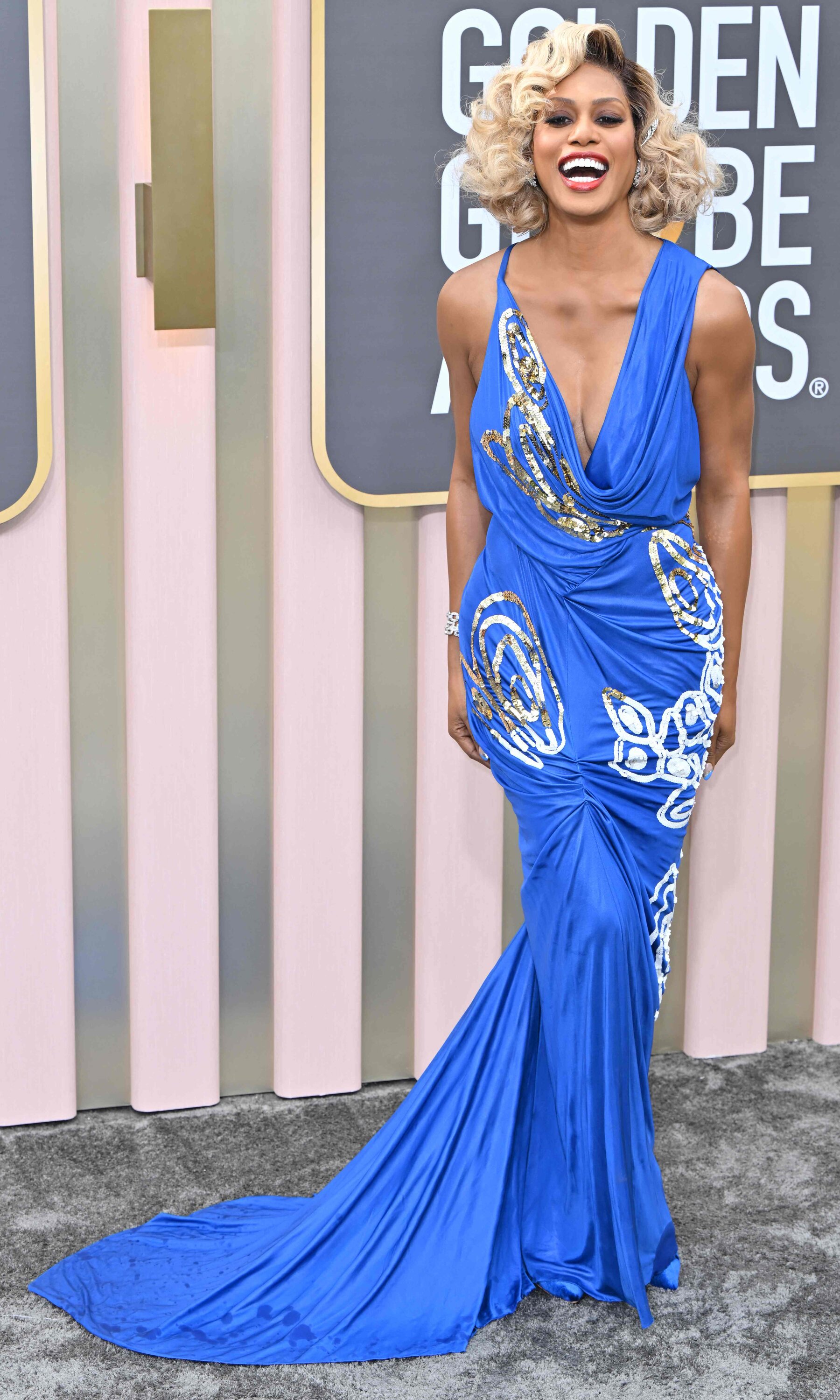 Angela Bassett played a silver superhero in Pamela Rolland sequins. Laverne Cox channeled Marilyn Monroe in a blond bob and vintage Galliano gown. And Jessica Chastain got caught in a gossamer beaded Oscar de la Renta spiderweb — with a matching mask. She was one of the few attendees to nod to the continued reality of Covid.

Royalty was a trend, represented in a plethora of red (Lily James in a bandeau top from which was suspended acres of swagged Versace skirting and Billy Porter in a cardinal velvet Christian Siriano coatdress with a sweeping train) and purple (Selena Gomez in Valentino and Sheryl Lee Ralph in glimmering Aliétte). This was probably not surprisingly given the recently unavoidable nature of the subject thanks to Prince Harry’s memoir.

Also pink, courtesy of Seth Rogen in salmon Dior Men and Margot Robbie in powder puff Chanel. (Rumors of her separation from the brand appear to be highly exaggerated.) And overblown rosettes on lapels, as represented by Eddie Redmayne’s chocolate Valentino, Diego Calva’s forest green Gucci and Emma D’Arcy’s oversize Acne Studios satin tux, skirt and trousers, chosen because, they said, “nothing says nonbinary like wearing both a skirt and trousers.”

There was a lot of speaking-in-clothes going on. Michaela Jaé Rodriguez, in draped sapphire Balmain, told E! that her dress was “giving water butterfly.” Michelle Williams, in cascading tiers of Gucci ruffles, looked like sea coral, wafting in the waves. And Jenny Slate, in leaf green Rodarte with a bloom at the throat, said she wanted to look “like a woman who’s about to turn into a magical plant.” Why not? It’s the beginning of the year. Anything could happen.

Donald Glover said he was going for comfort, and the chance to get “mildly drunk,” with his white silk YSL pajama-and-robe set under his tux, possibly the perfect combination of working-from-home dressing meets black tie. You can go from the ballroom to the bedroom in one easy step.

Indeed, it was but one of a variety of contemporary twists on ye olde tux, as modeled most successfully by Jean Smart in an elegant, sharp-shouldered tuxedo dress with an actual twist at the waist, and Hannah Einbinder in a strapless black Carolina Herrera tea dress with a white bow at the bodice.

She looked as if she could move, as did Letitia Wright, in a simple Prada trompe l’oeil silk column dress, deliberately crumpled and splotched with a rough-cut slash at the leg that was an ode of sorts to the elegance of imperfection. Like the night itself, it was a reminder that when it comes to our flaws, it’s how you deal with them that matters.

Letitia Wright in Prada.Credit…Amy Sussman/Getty Images
Tags
Dress From She That Was 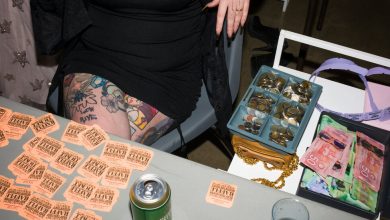 Engagement Parties With a Cover Charge 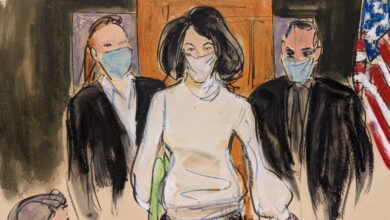 In Court, She’s Always Judging You 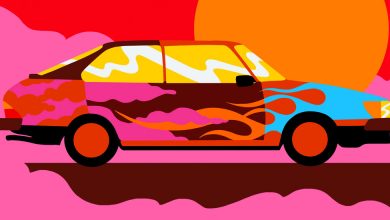 The Unusual Cool of Saabs 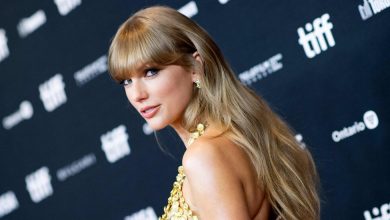 Want Taylor Swift Tickets? You’re on Your Own, Kid.